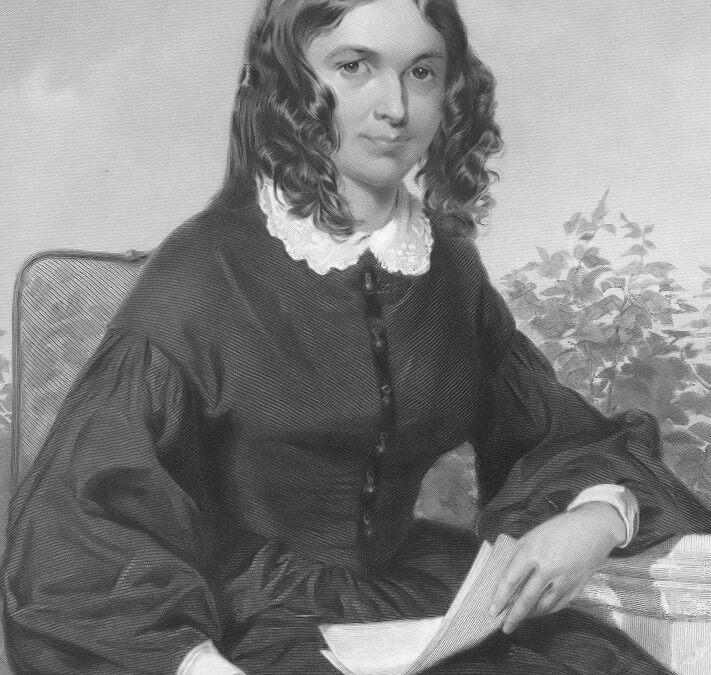 Elizabeth Barrett Moulton-Barrett was born in 1806, in County Durham, England to Edward Barrett Moulton-Barrett and Mary Graham Clarke. Elizabeth was the oldest of 12 children born to the wealthy family who had owned sugar plantations in Jamaica for generations. Elizabeth was raised with all the finery of high society. In 1809, the family moved to Hope End, a 500-acre estate in Ledbury, Herefordshire. Elizabeth was tutored at home and began writing verses at the age of four. Her father called her the “Poet Laureate” of Hope End.

As a child, Elizabeth was stricken with an illness that caused intense head and spinal pain with loss of mobility. She was treated for a spinal problem, but it continued for the rest of her life. She began taking opiates and was dependent upon them most of her life. In her teens, she read Mary Wollstonecraft’s A Vindication of the Rights of Women and became a supporter of her ideas.

Elizabeth’s mother died in 1828 and Elizabeth’s aunt, helped to care for the children. In 1831 Elizabeth’s grandmother died and her father’s investment losses forced him to sell Hope End. Between 1833 and 1835, they lived at Belle Vue in Sidmouth. Elizabeth was struck with another illness that could have been tuberculosis.

Between 1841 and 1844, Elizabeth was prolific in poetry, translation, and prose. Her 1844 volume Poems made her one of the most popular writers in the country. Her romantic subject matter attracted the attention of Robert Browning and they met in 1845 and married a year later.

The couple came to know a large group of writers and artists. Elizabeth’s interest in Spiritualism grew. While in Florence in 1847, she first heard about Spiritual phenomena. She became friends with the sculptor, Hiram Powers who had a common interest in Swedenborg and Spiritualism. By 1852, while in Paris, she discussed spirit rapping with Lady Elgin.  She crossed to England where she participated in table tipping experiments with her husband, Frederick Tennyson and Robert Lytton. She also met with Mrs. Newton Crosland, a notable Spiritualist.

Elizabeth was a believer in Spiritualism and it influenced much of her later poetry. Robert Browning was not easily convinced. They traveled back and forth between England and Italy. In 1855, they attended the Ealing séance, conducted by D.D. Home. It included spirit hands, rappings, table tilting and levitation, bell ringing, and direct voice. Browning thought it was all faked. Elizabeth believed most was real. It became a point of contention between them for the rest of their marriage.

In 1861, a few months before her death, Elizabeth wrote, “I don’t know how people can keep up their prejudices against spiritualism with tears in their eyes, – how that are not, at least, thrown on the ‘wish that might be true’, and the investigation of the phenomena, by that abrupt shutting in their faces of the door of death, which shuts them out from the sight of their beloved.” The couple spent the winter of 1860–61 in Rome where Elizabeth’s health deteriorated. She died on 29 June 1861 in her husband’s arms.

Hill, Christina B. T. (1977) A Study of Spiritualism in the Life and Work of Elizabeth Barrett Browning. Doctoral Thesis, University of Birmingham.