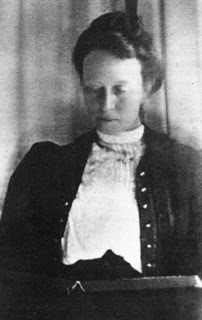 Margaret De Gaudrion Merrifield) was born in 1857, one of two daughters born to Frederic and Maria Merrifield of Brighton, Sussex, UK. Her father was a Barrister of Law and Margaret became one of the early students of Newnham College, where she eventually became a classical lecturer and tutor. According to her obituary, “She was also a good speaker, but she preferred the life of the study to that of the platform and committee room, although her political interests (which were, in general, on the side of the Liberal party) were deep and keen.”

In 1882, Margaret married Arthur Woollgar Verrall. He was educated at Twyford School, Wellington College and Trinity College and elected a fellow of Trinity in 1874. In 1911, he was appointed to fill the new King Edward VII professorship of literature at Cambridge. Margaret’s work as a scholar included the translation of the text of Pausanias with Jane Harrison for “The Mythology and Monuments of Ancient Athens.” She also published her husband’s lectures on Dryden after his death.

Margaret gained more recognition for her psychic research and work as a medium than she did as a scholar. She was a member of a Cambridge group who explored Spiritualism and automatic writing. She also participated in The Cross-Correspondences which became a large collection of linked mediumistic messages beginning in 1901 and continuing for 31 years. The mediums who participated were women who lived in the US, England, and India. The group included Margaret as well has her daughter, Helen, and other members of the Society for Psychical Research.

The communications were fragmentary and contained Greek and Latin phrases as well as other classical illusions. They were supposed to be meaningless when read by themselves but could be deciphered when joined together. Helen married William Henry Salter, who was later President of the Society for Psychical Research. She and Margaret were among mediums involved in the Palm Sunday Case in which messages from Mary Lyttleton, who died in 1875, were transmitted to her lover, Arthur Balfour.[6]

It was impossible to tell if the messages were genuine or the product of chance. Margaret carried out a study using six subjects to create false messages to determine if the false material could be linked to the real messages. The fakes were clearly different from the actual automatic writing, but that couldn’t definitively prove the case of connected messages.

Margaret’s husband died in 1912. She followed four years later after several months of suffering. According to her obituary, “As a member of the Society for Psychical Research, she gave much of her time and thought to the investigation of mental and physical phenomena in some of their many mysterious and as yet comprehended forms.”

The obituary appeared on p.181 of the newspaper “The Common Cause of Humanity,” the organ of the National Union of Women’s Suffrage Societies, on 14th  July 1916.