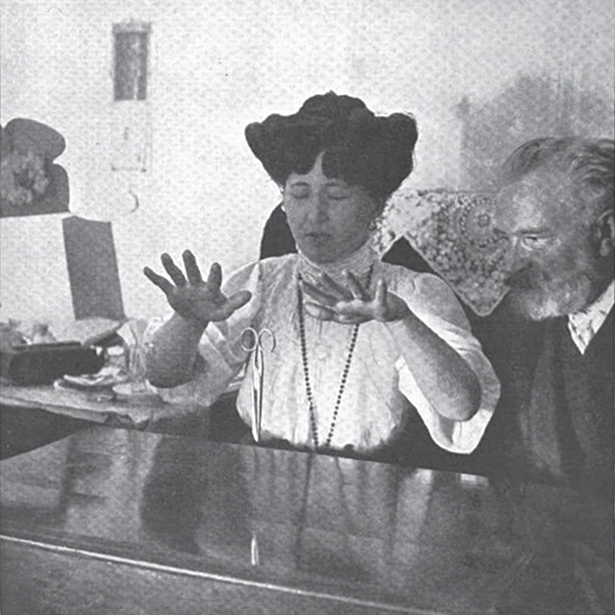 Stanisława Tomczyk was born in Poland in the late 1800s. She was arrested when she was twenty and that event was said to have brought on “hysteria” and mental dissociation. In 1908, she was found to be controlled by a spirit named Little Stasia while she was hypnotized for therapy. Dr. Julian Ochorowicz, a psychologist, conducted several experiments on Tomczyk between 1908-1909. Little Stasia communicated through alphabetic rapping, automatic writing, and direct speech during Tomczyk’s trance states. Tomczyk was said to be able to levitate objects, stop a clock protected under glass, and influence a roulette wheel. Dr Ochorowicz concluded that the movements were influenced by rigid rays projecting from her fingers.

Several investigators witnessed a series of seances at Geneva but were not impressed by Tomczyk’s abilities. The following year, she was investigated at the Physical Laboratory in Warsaw by a group of scientists under strict testing conditions. During testing, Tomczyk’s hands were examined and washed before each seance. A small object, such as a ball, cork, matchbox, or scissors, was placed before her on a table. She would then place her fingers about six to eight inches from the sides of the object. The object would eventually rise, floating between her fingers on each side.

The results were published by Baron Schrenck-Notzing in his Physikalische Phenomene des Mediumismus, Munchen (1920)  and by Charles Richet in his book Traite de Metapsychique, (1922). Sceptics insisted she was using a fine thread to trick the researchers.

Dr. Ochorowicz did mention seeing a black thread between her hands, but it may not have been an actual thread. Investigators thought it was a psychic line of force. Ochorowicz said: “I have felt this thread on my hand, on my face, on my hair. When the Medium separates her hands, the thread gets thinner and disappears; it gives the same sensation as a spider’s web. If it is cut with scissors its continuity is immediately restored. It is then seen to be much thinner than an ordinary thread.”

Little Stasia was known to be mischievous. She claimed she was not the Spirit of a dead person. Tomczyk thought she might be her double or part of her personality until the day Stasia requested that they take her photograph. Little Stasia rapped in alphabet code “I wish to photograph myself. Prepare the instruments.”

She gave directions on how to position the camera. Making sure the room was dark, Ochorowicz and Tomczyk left the room with the camera. After an hour, Tomczyk was told it was done and they could develop the plate. The picture was published in the Annales des Sciences Psychiques in 1909 with Ochorowicz’s report. He also wrote about bands of energy that she could use to levitate objects. He called them rigid rays.

When he asked Stasia about the light spheres surrounding her portrait. She said she had created the light and could demonstrate it for him. In the next two years, he witnesses bright flashes, tiny threads of energy emanating from Tomczyk’s fingertips, as well as dull glowing orbs floating around the room. He set up three cameras in a dark room. When developed, the light flashes were more visible. In one instance, one was a bright curved line with an irregularly shaped light with two smaller points.

Tomczyk was invited to be tested in Great Britain, between 2 June and 13 July 1914, by the Society of Psychical Research.  During the investigations, she was observed in ‘full light’ conditions. She also wore a blouse with short sleeves so nothing could be hidden. She was observed by several professionals over a series of 11 sittings, including Rev. Everard Feilding who she would eventually marry. Among other things, they witnessed a celluloid ball levitate about nine inches above the surface of a table but listed their results as inconclusive.

In 1919, Tomczyk married Everard Feilding. After she became Mrs Fielding, she discontinued her public seances.

Stolow, Jeremy (2016) Mediumnic Lights, X-Rays, and the Spirit Who Photographed Herself. University of Chicago Press.