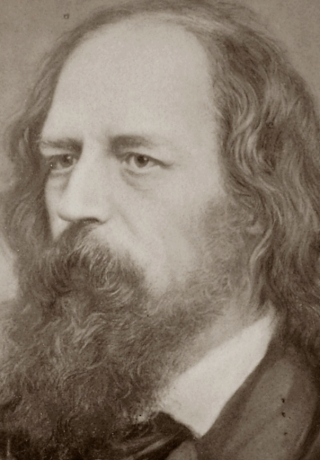 Alfred Tennyson was born in 1809 in Somersby, Lincolnshire, England to George Clayton Tennyson, an Anglican clergyman, and Elizabeth Fytche. Alfred was part of a large family, the fourth son of twelve, and his father was highly involved in their education. The family seemed plagued with serious health issues, including alcoholism and epilepsy. Despite that, Alfred and the older boys began writing poetry in their teens and published a collection of poems when Alfred was only 17. He left home in 1827 to join his brothers at Trinity College, Cambridge, more to escape from his family than to pursue academic work.

By the time his volume of Poems was published in 1833, Alfred was an established poet. The same year, Alfred’s good friend, Arthur Henry Hallam, was struck down by a sudden stroke and died. Alfred’s poetry showed a shift away from his childhood Anglican Evangelical upbringing. In In Memoriam A.H.H. (1849), he wrote, “There lives more faith in honest doubt, believe me, than in half the creeds.” In “Locksley Hall Sixty Years After,” Tennyson wrote, “Christian love among the churches look’d the twin of heathen hate.”

By 1850, Alfred earned the title of poet laureate. He married the poet, Emily Sellwood, a friend since childhood, and they had two sons, Hallam (1852), and Lionel (1854). Alfred had been interested in the occult all his life. He told his children ghost stories and attempted to contact his father by sleeping in his bed shortly after his death. He was interested in Spiritualism as early as 1854 and was looking for assurance of immortality. Emily wrote in her journal that “The Longfellows and A.T. talked much about spiritualism,” but she was against the practice.

Despite his wife’s objections, Alfred became part of the Metaphysical Society in 1869 with James Knowles, Thomas Huxley, Henry Sidgwick, and others. He attended meetings sporadically, listening but not debating. He attended his first séance in 1869 with Dr. James Acworth and his wife (a medium), where they witnessed table tipping.

Queen Victoria named Alfred the Baron Tennyson in 1884, but that did not protect him from more tragic death. Two years later, his younger son, Lionel, fell ill in India and while sailing home to England died in the Red Sea. After the death of his son, Alfred attended a séance with Laura Trowbridge. The table rapping spelled out letters, but he never received direct contact from his son. Alfred increased his search for the proof of immortality. His poetry of this period is filled with that desperation.

In 1888, Alfred and A.D. Coleridge experimented with table rapping and tipping. In a letter, Tennyson said, “I observed the smile of incredulity playing over your face, but there really is something in spiritualism.” On October 6, 1892, Alfred died at midnight, his finger holding open a volume of Shakespeare and his family surrounding the bed.

Ratcliffe, Carleen L. M. (2016) The Classical and the Christian: Tennyson’s Grief and Spiritual Shift from “The Lotos-Eaters” to “Ulysses.” Thesis. University of South Carolina