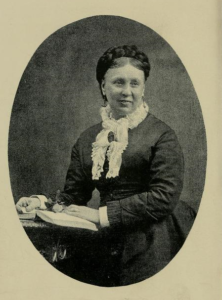 Emma was born in London in 1823 as Emma Floyd. She developed a reputation as a psychic medium very early. As a child, she predicted people’s futures and spoke about their deceased relatives, of whom she had no prior knowledge. When her father died in 1834, she began to support herself and her family, working as a musician, and opera singer. According to her autobiography, Emma joined a secret London occult society which used different clairvoyant techniques for experimental purposes. It is suspected that she received the name Hardinge from this society.

Emma came to America in the hopes of testing American susceptibility to Spiritualism. Instead, she witnessed many mystical experiences at séances that led her to becoming a part of the Spiritualist movement. She hosted spiritualist séances at the Society for the Diffusion of Spiritual Knowledge, worked as a “trance lecturer” and delivered speeches across the country.

Emma also became politically active in 1864, supporting Abraham Lincoln’s re-election. After delivering a lecture entitled, “The Coming Man; or the Next President of the United States,” she went on a thir

Emma married Spiritualist, William Britten, in 1870, the same year her book, Modern American Spiritualism was published. In 1872, she attempted to start a magazine, The Western Star, but it failed after six issues were published.

Today, Emma is most known for her addition of the Seven Principles to the Spiritualist movement. In her autobiography, edited by Emma’s sister, Margaret Wilkinson, she wrote of the event where the principles were first suggested.

Margaret and Emma were well acquainted with the Fox sisters, who were known for their communication with spirits through knocking sounds. The eldest sister, Mrs. Leah Underhill, was one of the best rapping and physical mediums that they had ever met. Emma said that Leah, “never flagged in her devotion to the cause she had espoused, but opened her handsome house in 37th Street, New York, for winter evening receptions, in which, whenever I was in the city, she kindly invited me to become her associate.”

At one séance attended by Emma Hardinge and her mother, Oliver and Mary Anne Johnson, Robert Dale Owen, William Lloyd Garrison, and a few others, the spirit of Robert Owen (father of Robert Dale Owen) manifested with loud rappings and calls for the alphabet.  He communicated that “he wished to give a set of Spiritual Commandments through Emma, if she would kindly submit to his control, whilst his son, Robert Dale Owen, should transcribe them as the entranced medium spoke.”

The Ten Spiritual Commandments dictated were:

I Thou shalt search for truth in every department of being: Test, prove, and try if what thou deemest truth is truth, and then accept it as the word of God.

II Thou shalt continue the search for truth all thy life: And never cease to test, prove, and try all that thou deemest to be truth.

III Thou shalt search by every attainable means for the laws that underlie all life and being: Thou shalt strive to comprehend these laws, live in harmony with them, and make them the laws of thine own life, thy rule and guide in all thine actions.

IV Thou shalt not follow the example of any man or set of men: Nor obey any teaching or accept of any theory as thy rule of life that is not in strict accordance with thy highest sense of right.

VI Thou shalt acknowledge all men’s rights to do, think, or speak, to be exactly equal to thine own: And all rights whatsoever that thou dost demand thou shalt ever accord to others.

VII Thou shalt not hold thyself bound to love, or associate with those that are distasteful or repulsive to thee: But thou shalt be held bound to treat such objects of dislike with gentleness, courtesy, and justice, and never suffer thine antipathies to make thee ungentle or unjust to any living creature.

VIII Thou shalt ever regard the rights, interests, and welfare of the many as superior to those of the one or the few: And in cases where thy welfare, or that of thy friend, is to be balanced against that of society, thou shalt sacrifice thyself, or friend, to the welfare of the many.

IX Thou shalt be obedient to the laws of the land in which thou dost reside: In all things which do not conflict with thy highest sense of right.

X Thy first and last duty upon earth, and all through thy life, shall be to seek for the principles of right, and to live them out to the utmost of thy power: And whatever creed, precept, or example conflicts with those principles, thou shalt shun and reject, ever remembering that the laws of right are – in morals, JUSTICE; in science, HARMONY; in religion, THE FATHERHOOD OF GOD, THE BROTHERHOOD OF MAN, the immortality of the human soul, and compensation and retribution for the good or evil done on earth.

The Creed of the Spirits. Paul J. Gaunt. The Britten Memorial Museum.