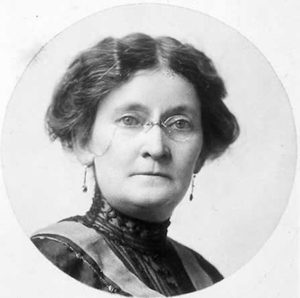 Trance, Clairvoyance, Clairaudience, and automatic writing are all techniques used by Spiritualists to communicate with the spirit world.   A number of physical mediums were able to produce the phenomena called Direct Voice at the turn of the 20th century.  The list includes Mrs. Everitt, Mr. Cecil Husk, Mr. CE Williams and George Spriggs, but one person who stands out is Mrs. Etta Wriedt.

Etta was born in Detroit in 1859.   She was a professional medium who only charged one dollar for a séance.   She didn’t sit in a cabinet, and never went into trance. Etta had two spirit guides. One guide was named Dr. John Sharp. He said he’d been born in Glasgow in the 18th century but moved to the US where he became an apothecary farmer in Evansville, Indiana.  The other contacted Etta during her five trips to Great Britain. He was called John King or “Sir Henry Morgan” and he had lived in Britain 250 years before.

During Etta’s visits, John King produced many physical manifestations. Flowers were taken from vases and handed to sitters, invisible fingers touched the sitters, luminous discs as bright as the moon moved around the inside of the circle.  Sitters were also sprinkled with drops of water and wafted with cool air. Heavy objects moved around them. Etta clairvoyantly read names that were shown to her. When she called out the name, if it was recognized by one of the sitters, the name would be called through a trumpet by a spirit.

Etta never went into a trance, so she talked naturally through all of her séances. She would give names and described spirit visitors, and indicate whom they had come to communicate with.   Sometimes she would be interrupted by a spirit voice, and the two would talk simultaneously.   Voices were heard in full-light as well as in darkness.  Two, sometimes three and rarely four voices were heard speaking at the same time about matters unknown to the medium.  On one occasion one voice was singing while the other spoke. Etta only spoke English, but the voices spoke other in languages such as Dutch, French, Spanish, Norwegian and Arabic.

Sir William Barrett said of her mediumship, “I went to Mrs. Wriedt’s séances in a somewhat skeptical spirit, but I came to the conclusion that she was a genuine and remarkable medium, and has given abundant proof to others, beside myself that the voices and the contents of the messages given are wholly beyond the range of trickery or collusion.”

Admiral W. Usborne Moore made detailed records about the extraordinary mediumship of Etta Wriedt. “This American woman has a mysterious gift which enables those who sit in the same room with her to learn of the continued existence of those whose physical bodies have perished. The possession of this strange power is acquired by no virtue of her own; she was born with it,” he said.

An Encyclopaedia of Psychic Science by Nandor Fodor (1934).

“This World – and Beyond” by Mrs P. Champion De Crespigny