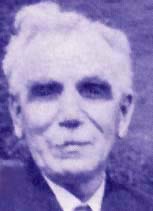 John Campbell Sloan was born in 1869 in Glasgow, Scotland. Supernatural occurrences began taking place around him at a young age.  He was often disturbed by rappings and strange voices which he did not understand. As an adult, he put his talents to use, offering his skills as a medium. He worked as packer in a warehouse and a small shopkeeper to earn a living because he accepted no remuneration for his seances.

Sloan’s mediumship skills included trance readings, telekinesis, apports, direct voice, materializations, clairvoyance and clairaudience.  Unlike many mediums, Sloan used no cabinet. His spirit guide was White Feather, an American Indian who preferred to be called Whitie. Whitie spoke through Sloan using either his vocal chords or a trumpet.

In 1918, J. Arthur Findlay attended one of Sloan’s seances at a Spiritualist church in Glasgow. Findlay was skeptical at first. “On the first occasion I experienced these voices I was decidedly suspicious, and yet as the séance went on, I wondered how it would be possible for any man, even if he had accomplices, to carry on such an imposture for over three hours.  Thirty separate voices spoke that night, of different tone and accent, they gave their names, their correct earth addresses and spoke to the right people, were recognized, and referred to intimate family affairs,” Findlay wrote in his book, On the Edge of the Etheric, in 1931.

Findlay set aside his doubts when his own father spoke to him from the spirit world. When the voice referred to something that only Findlay knew, he was sure that Sloan was not a fraud.  Findlay wrote, “No spy system, however thorough, no impersonation by the medium or by any accomplices, could be responsible for this, and moreover I was an entire stranger to everyone present.  I did not give my name when I entered the room, I knew no one in that room, and no one knew me or anything about me.”

During the next five years Findlay attended many seances at Sloan’s home and became convinced spirit voices were speaking through the medium. During that time, Findlay founded the Glasgow Society for Psychical Research and took part in the Church of Scotland’s enquiry into psychic phenomenon.

Findlay transcribed thirty-nine different séances with Sloan. During that time, eighty-three separate voices spoke to those attending the seances. Findlay documented two hundred and eighty-two separate communications. One hundred and eighty of them he classified as “A1,” information that was impossible for the medium or any other person present to have known about. One hundred were classified as “A2,” information that could have been found in a newspaper or reference books.

Sloan’s seances caught the attention of Hewat McKenzie. McKenzie founded the British College of Psychic Science in London with his wife 1920. In order to have Sloan at the disposal of the British College of Psychic Science, McKenzie found employment for Sloan in a London garage for several years. Sloan died in 1951 and was considered one of the most talented mediums of his time.