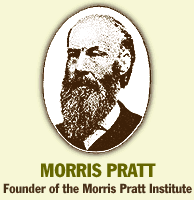 Born in 1820 in New York, Morris Pratt moved to Milton, Wisconsin and built a successful farm. After visiting Lake Mills Spiritualist Center in 1851, he became interested in psychic phenomena and Spiritualism. During the 1850s, he witnessed séances, spirit knockings, and the work of mediums.

He was known to argue frequently with ministers who criticized Spiritualism. On numerous occasions he was evicted from churches. One time, he was even fined for his actions. These conflicts led him to the realization that there was a need for educated individuals to present the religion in an intellectual way.
He vowed that if he were ever wealthy he would give his fortune to support the “scientific teaching of spiritual truths.”

About 1884, Pratt invested his savings with Mary Hayes Chynoweth, a well-known psychic healer. Her spirit guide had instructed her to purchase acreage in the northern Wisconsin forests. The land, it turned out, contained some of the richest iron ore deposits ever found. Pratt eventually sold his shares for more than $200,000. 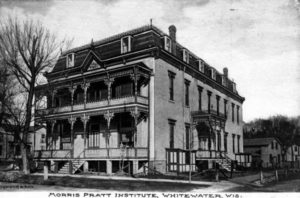 Pratt did not hesitate to fulfill his promise. In 1888, he began construction on the most expensive home in Whitewater, Wisconsin. The building was assessed at $30,000 and contained two large auditorium halls, one which seated nearly 400 people. Pratt designed the building as a temple and a school for Spiritualism.

In 1901, he filed a petition for incorporation of the Morris Pratt Institute. The subjects taught would be Science, Mathematics, Language, Oratory, Voice and Physical Culture, English and Rhetoric, Bible Exegetics, Higher Criticism, Logic and Parliamentary Law, Comparative Theology and Psychic Culture.

Unfortunately, Pratt passed on to the spirit world on December 2, 1902 before his dream came to fruition. Moses Hull, a Seventh Day Adventist minister who had turned to Spiritualism, went forward with Pratt’s plans and opened the school on September 29, 1903. The institute still operates today.