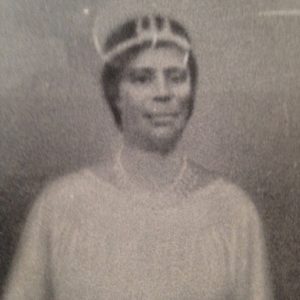 There is no birth record for Leafy Anderson, but her obituary said she was born in 1887 in Balboa, Wisconsin, a town that never existed. Wherever she was born, she eventually moved to Louisiana and married William Anderson in Raceland. That marriage did not last. Anderson left her husband and moved to Chicago in 1914 before relocating to New Orleans in 1918.

Most churches in the 1920s were led by male pastors. Anderson broke that mold. She founded the Spiritualist movement in New Orleans. Her church included the use of Spirit Guides in worship services along with a mixture of Protestant and Catholic practices.

Anderson trained other women to assumed leadership roles as the movement spread across the city. She invited jazz bands to play in her church when many black ministers denounced it as the devil’s music. New Orleans leaders later dropped the “ist” from their name and called themselves Spiritual, putting a greater emphasis on Jesus.

Anderson taught followers to summon spirits, offering classes for a dollar a session. She was known for her yellow and gold robes draped with a mantel bearing the image of Black Hawk, her spirit guide. She told her followers that she had found the spirit of Black Hawk, an historical Native American, in Chicago. She considered him a protective figure and guardian who united the beliefs of Christianity with the ancient idea of a spiritual cosmology.

Anderson died of flu in 1927. Her last words, reportedly, were, “I am going away, and I am coming back, but you shall know that I am here.”

After her death, Anderson’s successor, Mother Catherine Seals, ran The Temple of the Innocent Blood church. When Seals died, the church broke apart, giving rise to many Spiritualist denominations in New Orleans and elsewhere.