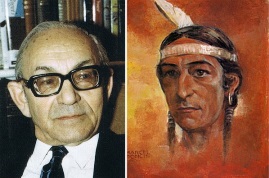 Spirit guides are some of the angels that contact us through mediums. Because their instruction can be enlightening, I want to take a few blogs to discuss some of the more noteworthy spirit guides of the past.

Silver Birch was a spirit guide who spoke through Maurice Barbanell (1902-1981). Barbanell was the founder and editor of the Psychic News of London. Silver Birch’s teachings became popular in the late 1930s and resulted in the publication of nine books documenting his communications.

Silver Birch took on the identity of a Native American and he said he was only acting as translator. “I am but a humble servant,” he said. “an interpreter for those who have sent me to expound forgotten laws that must be revived as part of the new world that is gradually dawning. Think of me always as a mouthpiece. I represent the voice of the spirit that seeks to make its presence felt in your world and which is succeeding in increasing measure.” His described a group of communicators who harmonized their minds to create the messages that he communicated to Barbanell.

Silver Birch gave few details about his own earthy existence, but mentioned that his last lifetime occurred about 3,000 years earlier. While on earth, he said he worshiped many gods, but had learned in the spirit world that “there is only one Great Spirit, who has provided eternal laws for the control of every phase of life throughout the boundless universe.”

Barbanell’s book, Thou Shall Be Comforted, discusses Silver Birch’s teachings on existence after physical death. When we pass on, he said that we do not enter Heaven through “pearly gates”, neither do we descend to Hell through lakes of “fire and brimstone”. The person who has died will be the same individual as they were in life, except that they will have no physical body. The spirit body is a replica of the physical one, but without any of its physical imperfections.

When one arrives in the spirit world, the person meets those who have preceded him. Families and friends are reunited most of the time, but because of the law of attraction, only those of similar spiritual qualities will meet on the same plane. Married couples or family members who held no real love for each other will not be together in the spirit world.

The spiritual world may take on the trappings of physical existence, including homes, clothing and food. Silver Birch said this is a habit from our physical make-up. The houses are not made of bricks and mortar, but constructed out of thought. Desire for food is a mental craving and a spirit can maintain the illusion if it requires it. People are free to express their talents, with no physical limitations. People also speak the same language – thought. Those thoughts are never hidden and lying is impossible.

After a person passes into the spirit world, he naturally gravitates to the correct spiritual sphere according to the life lived and the character evolved on the earthly plane. A person cannot occupy a higher sphere than the spiritual status he has reached, but spirits can evolve over time to reach higher spheres.

Reference: They Shall Be Comforted by Maurice Barbanell and Silver Birch