SPIRITUALISM IN THE WHITE HOUSE: Lincoln 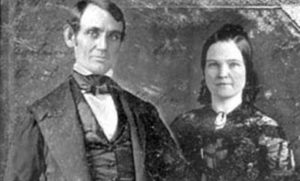 Many scholars in the past have downplayed Abraham Lincoln’s interest and participation in Spiritualism. This was probably due in part to their own bias against the religion. They considered seances and private readings to be a symptom of Mary Lincoln’s mental instability. Despite their rejection of the idea that President Lincoln participated in seances or had any interest in psychic phenomena, recent research suggests Lincoln took an active role in both.

The Lincolns had an early interest in dreams, visions and omens which were part of their Christian beliefs while growing up in Kentucky. It is not surprising that they would gravitate toward Spiritualism, a newly evolving religion at the time, after the death of their beloved son, Willie.

To deal with her grief, Mary sought comfort from mediums. She was so impressed that one night she knocked on the door of the Prince of Wales’ bedroom and said “He lives. He comes to me every night and stands at the foot of my bed with the same sweet, adorable smile he has always had.”

Medium Nettie Colburn Maynard recorded her lengthy relationship with the Lincolns in her book, Was Abraham Lincoln a Spiritualist? (1891). Nellie listed Charles Foster, Charles Colchester, Mrs. Lucy Hamilton and Charles Redmond as being some of the other mediums who worked with the couple. New York spirit medium, J. B. Conklin, visited the White House on numerous occasions and the automatic writings he sent to the president are now kept in the Library of Congress. Lincoln also had several acquaintances who were psychics and/or Spiritualists, including Paschal Beverly Randolph, an African-American mystic.

The President attended seances at the home of Margaret Laurie and her daughter Belle Miller, the so-called witches of Georgetown. Her son Jack later wrote, “I have very often seen Mr. Lincoln at my father’s house engaged in attending circles for spiritual phenomena and generally Mrs. Lincoln is with him.”

President Lincoln may have employed mediums and psychics, but he wasn’t naïve. When he had concerns about Lord Colchester, a man claiming to be the illegitimate son of an English duke, Lincoln asked some of his staff to investigate.   One of the investigators, Noah Brooks, discovered that Colchester cheated during his seances by untying his hands to play music. When Colchester later tied to blackmail Mary, Brooks intervened again.

The Lincolns and Nettie Colburn Maynard understood their participation in seances could jeopardize the President’s political standing. Nettie wrote: “Mr. Somes frequently warned me that it would be unwise to talk to newspaper men, or to answer any of the many inquires that were constantly made regarding the subject of our presidential seances….” It is not surprising that up to this day, the President’s interest in Spiritualism remains a bit of a mystery.