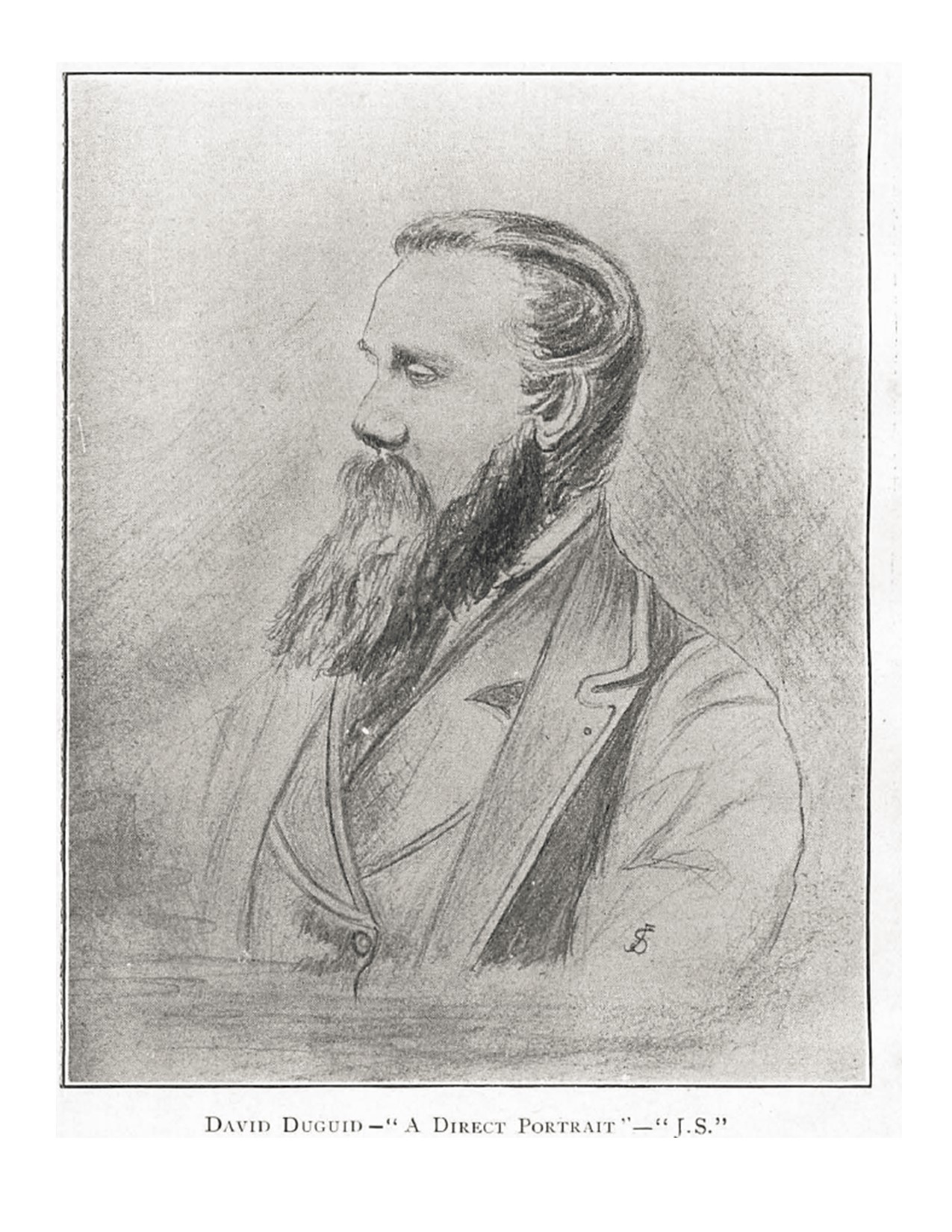 David Duguid was born at Dunfermline, Scotland in 1832.  He had little education, which was typical of the working class, but was trained as a cabinetmaker. He was able to attend the Government School of Art in Glasgow for four months. He didn’t gain much notoriety as a medium, partly due to his social standing, and worked for a business firm until his death in 1907.

Duguid became interested in Spiritualism and mediumship in 1866. He joined a séance in which table tipping experiments were being tried at the house of a friend, Hay Nisbet, a printer in Glasgow. Duguid experienced shaking in his arms and cold drafts. Mr. Nisbet’s daughter first discovered that Duguid might be trying to write. She provided him with a pencil and paper. Instead of writing, he drew rough sketches of vases and flowers, and then a section of an archway. The name, Marcus Baker, was given as a message.

He tried again a few days later with colored pencils and drew fruit and heads. During the next sitting, watercolors were provided. During trance, Duguid heard again from Marcus Baker, an artist from Belgium who refused to give his real name. He painted a scene with rocks, pines, a hut and a waterfall. The initials J.R. appeared in the corner of the painting. It wasn’t until Duguid attended an art exhibition and found a painting called The Waterfall by Dutch artist Jacob Ruisdal, that they knew who his spirit guide was.

Duguid began working in oil, creating small card-sized pieces of art work in a lighted room with Ruisdal who was often accompanied by another artist, Jan Steen. In 1869, Duguid was instructed to work in darkness, told that drawings could be finished in less time. During one sitting, six pictures were produced, each in one to three minutes. A number of direct writings were also done at the same time.

In August of the same year, a new spirit began to speak through Duguid. He identified himself as a Persian Prince named Hafed. Duguid started regular sittings so that Hafed could relate his personal experiences from the first century Christian era. Forty-six sittings were held from November 29, 1869 to January 20, 1872. Twenty sittings followed later that year for questions and answers. The artists created cards to accompany the story. Forty were completed by May 1875.

The entire experience was published as Hafed, Prince of Persia: His Experiences in Earth-Life and Spirit-life; being Spirit Communications received through Mr. David Duguid, the Glasgow Trance-Painting Medium, with an Appendix containing Communications from the Spirit Artists, Ruisdal and Steen. Illustrated by facsimiles of forty-five Drawings and Writings, the Direct Work of the Spirits by James Burns, London and H. Nisbet, Glasgow.