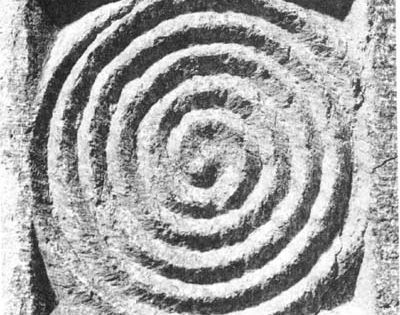 When I was a young girl, I died on the operating table while having my tonsils removed. The doctors revived me, but not before I had a near death experience. I never talked to anyone about it at the time, but that experience may explain my obsession with drawing spiral symbols as a child. I didn’t know what they meant, but after doing some research on the subject, I have found that spirals are an ancient symbol used for thousands of years in every part of the world.

Spirals have been found painted and engraved on cave walls of Upper Paleolithic times and on standing stones of the Neolithic. Single spiral symbols have been found in Stone-Age Europe, the Near East, pre-dynastic Egypt, as well as in Peru, China, and Polynesian societies. At an Irish site called Brú na Bóinne, occupied over 6,000 years ago, the spiral symbols are a dominant feature. They are also found at the 2,000-year-old Serpent Mound in Ohio and on a 18,000-year-old mammoth ivory piece, discovered in Siberia.

So, what does the spiral symbol mean? We can only guess what the spiral in prehistoric art represented. Some think it may have signified the sun or a way to reach the spirit world. Others think it could represent life itself or eternity. It may have also been a calendrical device to divide the year into seasons and solstices. Canadian anthropologist, Genevieve von Petzinger, found that the use of the spiral is not found regularly in Europe until after the Upper Paleolithic. Since spirals are a common symbol found in trances states, its absence may tell us something about humans achieving these states.

In later times, the spiral in the Kongo religion represented man’s celestial origin and universal salvation. It symbolizes the path to salvation in Kabbalah magic. To reach the sacred apex of the Tower of Babel a circular, seven-tiered path had to be followed. The spiral was considered the center of the world in the Tibetan kingdom of Shambhala. Many suggest the spirals symbolize rebirth or as a symbol of a mother goddess and are interpreted as symbolic wombs.

Emanuel Swedenborg wrote about the spirals of the mind: “Much the same happens in the organic forms of the mind . . . The difference is that their expansions and compressions, their alternating motions, are relatively so much more perfect that there is no way to describe them in the words of ordinary language, but only in words of spiritual language, which indicate by their sound that these changes and variations are vortex-like inward and outward gyrations, after the manner of perpetually circling spirals wonderfully combined into forms receptive of life. (Divine Providence §319)”

In terms of modern spirituality, the spiral is said to represent the path leading from outer consciousness to the inner soul. It marks the evolution of mankind from the physical to the spiritual realms. Andrew Jackson Davis saw the spiral as a natural principle and said in The Magic Staff: “Yes! can you not see that radiant shaft of spiral light reaching all the way from the sleeping youth’s uneducated head to a Focus of Thought beyond the stars? There! do you see that? An answering shaft descends! His benumbed hands do quiver with a new sensation, and the muscles of his face do vibrate and tremble with the inflowing power.”